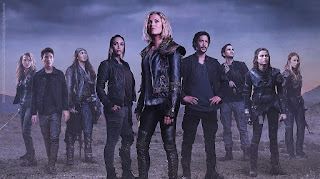 My favorite series, although it has been a difficult decision, I think it is The 100. His main argument is set in about 100 years, and is about the last survivors of the human race, who are in space in 12 space stations that orbit the Earth, since the surface of the Earth was destroyed by a nuclear war. In the first chapter, 100 people are sent to Earth, specifically young criminals, to see if life on the planet is already possible. I say that is the main argument, since this lasts about 3 out of the 7 seasons it has. From the third, the argument could be said to have twists quite drastic, which I am not going to say because it would obviously be a spoiler. The most important characters are, both some of the young criminals who are sent to earth, like some adults with important positions that stay in the stations. I would say that the 3 most important characters are Clarke, Bellamy and Octavia, being these last two brothers. Upon reaching Earth, both Clarke and Bellamy wanted to be in command. Clarke assumed that position, possibly due to the position of their mother in the Ark, the stations in which they lived, since she was the official nurse, and Bellamy wanted to assume it because in the Ark she was part of the guard. Octavia started out as a not-so-important character, since he was quite irresponsible, did not take on the tasks assigned to him, and his brother had to be always behind him, but with the passage of the chapters and seasons, he became one of the most important, if not the most important. In the Ark there are also very important characters, for example, someone already mentioned, as she is Clarke's mother, Abi, as she is the most important nurse. There is also Jaha, the governor of the Ark, and Marcus, basically the co-governor. I think I like this series so much for the characters, because the truth is that I think the vast majority very interesting, and for the plot, since the series of this type, pos apocalyptic, they always catch my attention. It is precisely for these reasons that I totally recommend it.