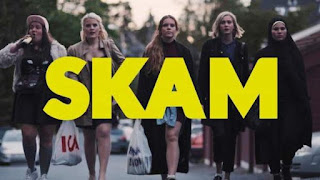 Skam is a Norwegian series, although many countries have made their version, including Spain, although it is not the best, in my opinion.
The serie is about the daily life of teenagers from a Norwegian highschool, and each season focuses on one character, so in each one we can see the different problems of the characters, which are problems that teenagers from today.
The series focuses on the life of a group of five friends, although only three of them starred in one season.
The series deals with all kinds of topics, without stigmatizing them, and covering them in an open, natural and close way.
CHARACTERS:
• Eva: is the protagonist of the first season of Skam. She is intelligent and a good friend, although she is also an insecure person, she has many fears and a very low self-esteem. The story in her season focuses on her insecurities and her relationship with her boyfriend, what was complicated. This season covers topics like feminism, loneliness, dependency, toxic relationships and friendship.
• Noora: Along with Sana, she is my favorite character. She starred in the second season. Noora is very kind, independent and strong. Throughout the series, she highlights her way of defending feminism. She is a very loyal person.
Isak: is the central character of the third season. In the first season, his personality didn't stand out too much and he was always "hidden" from his friends. As the series progresses, Isak gains a little more self-confidence, but he is still afraid of what people think of him, since he is gay, although until the third season he does not come to accept him openly. As the season progresses, she learns to accept her sexuality. His season focuses on sexual identity, self acceptance, and homophobia.
• Sana: She is another of my favorite characters, she was the protagonist in the last season. Sana is a Muslim girl, with a lot of self-confidence. She is very intelligent, she is even one of the best students in the class, and she wants to study science. Islamophobia, racism, and also feminism are discussed in its season.
• Vilda: although in the original version this character did not have a season of his own, in some remakes, including that of Spain, she starred. At first, Vilda is a superficial person, she was very concerned about the image that others of the group of friends could have, and also her own image, since, in fact, in one season, it could be seen that she suffered an eating disorder. In the past two seasons, Vilda is already a more self-confident and tolerant person. In addition, as can be seen in some versions of the series in other countries, Vilda's mother is ill and her family had financial difficulties.
I recommend watching it as it is the most inclusive series I've seen, since we can see all kinds of characters. In addition, the series covers many very important topics, such as isolation, homophobia, self-esteem problems, religion, machism, eating disorders ... And it also treats them in a very realistic way. In addition, it almost doesn't have stereotypes, which is something very frequent in the series of teenagers.