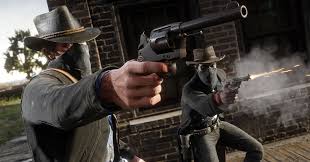 Genre: It is a western action-adventure game with role-playing game mechanics, based on the wild west.

Game type: It's a historical adventure full of drama.

Initial release date: This game was realeased on October 26, 2018 .

Platforms:  Is availablePlay Station 4 , Xbox One and PC

PEGI: The game is PEGI 18, but I saw the trailers and some gameplays before buying it and finally I decided to bought it.

Mode: Single player, but there is also an on-line version so you also can play with your friends and other people.


Plot: The game is based on the year 1899, when the Wild West age is reaching its end. In the game
you play as Arthur Morgan and you are member of a gang leaded by Dutch Van der Linde. Among the game you have to do many missions, helping some people or assaulting shops, banks, etc... All of this with the officials chasing you and your band.

Hot points: One of my favorite things apart from the excellent graphics, is that you can choose ,depending on your actions and if the sheriff and its officers take you, if you are a good cowboy or a will outlaw. Also the fantastic and realistic details. For example, if you want to be an outlaw you probably will see posters with your face in the cities or villages that you have assault and you will be chased by officers and NPC´s that want to catch you for the prize of you reward.

Weakness: For me there are not many weakness in this game, if I have to say something I'd probably say that you must have many time if you want to do missions, because there are some of them that are very slow and have a big duration.

Veredict:  I highly recommend this fantastic game because I love it and is probably my favorite one.
Due to the amazing quantity of details and its spectacular view and graphics.