This form of skiing began in the 1930s, when Norwegian skiers began performing acrobatics during alpine ski training. Later, non-professional skiers began to exhibit in the United States, shaping what would later be called acrobatic skiing

In moguls, or bumpy skiing, participants go down a track on which there are piles of snow that are used as push points for jumps and turns, starting and ending on a trampoline. Seven judges assess each performance: two for the jump and five for the quality of the turns.

The jumps are made from snow-covered ramps, which the skier reaches by throwing himself from a slope, without the support of sticks. From there, they perform high jumps that allow them to perform tricks, which are valued by the five judges. Triple somersaults and several spins can be performed. 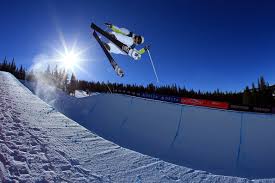 Competitors compete on a half-pipe track located on a slope, performing acrobatics or 'tricks' along the way. Their performance is assessed by five judges, who evaluate the height, spin, technique and difficulty of the 'tricks' performed.

This is a race all against all in a series of four skiers along a route that includes turns, jumps and slopes. Falls and collisions between skiers are not uncommon.

The goal is to get the highest score from the judges.