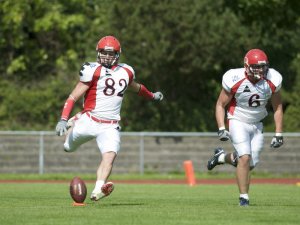 Photo credit: Torsten Bolten (source)
American Football is one of the biggest North American sports. Whilst the game is played worldwide, the professional leagues in North America (such as the NFL) easily attract the best players in the world making its leagues the most competitive. The pinnacle of the sport comes in the form of the Super Bowl played out every year to millions of people around the world.

Object of the Game

The object of American football is to score more points than your opponents in the allotted time. To do this they must move the ball down the pitch in phases of play before eventually getting the ball into the ‘end zone’ for a touchdown. This can be achieved by either throwing the ball to a teammate or running with the ball.
Each team gets 4 chances (downs) to move the ball 10 yards forward. Once they pass the 10 yards their downs reset and they start again for another 10 yards. After 4 downs have passed and they have failed to make it over the 10 yards required the ball will be turned over to the defensive team.

The team with the most points at the end of the game will be deemed the winner. If the points are tied then over time will come into play where the teams will play an additional quarter until a winner is found.